I found this online and thought it would be fun to share. Sorry to me American friends who probably wont get any of it.

You made worms by squeezing your Vegemite or peanut butter crackers together.

Getting the Easter Show guide from the paper and circling all the show bags you wanted.

You thought everyone in America carried a gun and you never wanted to go there because you were were scared you'd get shot.

Doing research for school projects by going to the library or looking up an encyclopaedia rather than using the internet.

Paul Keating was some guy that ran the country and John Howard became the only PM you really ever knew because you were too young to care before that.

Everyone got the Coke bag at the Easter Show and it was only $10.

A pinch and a punch for the first day of the month. No returns!

Bathurst stopped being Holden vs. Ford and all those European cars came in until they came to their senses.

That's so funny, I forgot to laugh.

You decorated your room with glow-in-the-dark stickers.

Seeing a small rack of DVDs in the video store and wondering if anyone ever rented them.

Getting up early to watch the Rage Top 50.

Friends when they were all actually just friends. Why didn't Phoebe and Joey get together?

Watching The Simpsons back when it was funny, every night on Channel 10.

Power Rangers becoming cooler than the Ninja Turtles, even though the Turtles will always be cooler.

Watching Hey Dad! and then seeing little Arthur McArthur go on to star in that famous Sorbent ad.

The winner is… Sydney.

Waiting for Tony “Plugger” Lockett to break that record.

The Socceroos couldn’t qualify for the World Cup.

John Eales captained the Wallabies and we won the World Cup.

Zoopa Doopa ice blocks were only 20c and if you couldn’t afford it, you asked the canteen lady to cut it in half so you could split it with a friend.

Happy Meals were only $2.95 and the toys were simple but actually good.

Brad Fittler was the best in the world.

Thorpe won lots of gold medals and wasn’t so gay.

Playing tackle Bull Rush at lunchtime and having tackling banned. You had to resort to grab 1-2-3 or tip. Same goes for footy.

You laughed at the fat kid on the Cottees cordial ad and changed the song to "My Dad picks his nose..."

You ate Smarties instead of M&M’s.

You had to actually call your friends rather than send them an SMS.

The feeling of wonder you got, the first time you were able to see the image in one of those Magic Eye 3D pictures.

Talk to the hand!

Johnson and Friends, Noddy and Humphrey B. Bear.

You wished you had enough Lego to build those amazing cities they displayed in the brochures.

Playing truth or dare with your secret crush.

Roger Ramjet, he’s our man, hero of our nation.

We had paper money.

Telling those Dobbers where to stick it by singing, "Dibba dobba dibba dobba number nine, wearing nappies all the time" and, "Dibba dobba Cindy went to kindy, stepped on a bindy wa wa wa."

Good on ya Mum! Tip Top’s the one!

You could buy more than enough food from the school canteen for only $2.

Begging your parents to go to McDonald’s for dinner.

Going to World 4 Kids to look at all the toys.

Watching The Lion King and feeling Simba’s pain when Mufasa died. Disney just doesn’t make them like that anymore.

Soft serve cones were only 30c and they never tried to up-sell a Flake because they didn’t have it.

Nesquik without the Nes.

The Kids' Works at Pizza Hut with unlimited drink refills. You made an ice cream mountain covered in choc chips and marshmallows and could never finish it.

Thomas the Tank Engine and TUGS.

You had to get your photos developed.

Your family didn’t own a 4WD unless it was a real one like a Land Cruiser or Patrol. Range Rovers were tough and nobody thought BMW would make a 4WD, let alone Porsche.

The Channel 9 logo had dots next to it and the Channel 7 logo wasn’t a folded piece of paper.

High five! Up high, down low, too slow!

Cheating in Heads Down, Thumbs Up.

You always wished your parents had bought you a bigger Super Soaker for Christmas. Christmas is hot in Australia... the more water, the better.

Collecting hundreds of tickets from Timezone just so you could trade them for some crappy prize that you could have bought from Woolies for ten bucks.

Healthy Harold day was the best because you got to miss class to sit in a tiny caravan and listen to a talking giraffe.

Playing handball with Ace, King, Queen and Dunce and making up stupid rules as you went along.

Chewing the crappy gum in Bubble-O-Bill's nose and wishing they could just use Hubba Bubba instead.

Having your very own Dollarmites account and getting really excited when you earned a tiny bit of interest.
Posted by Alicia Barry at 10:19 PM 12 comments:

I have been tagged by both Renee and Tanya. Thanks girls.

I've seen this one going around the place lately. Very sweet idea.

Here's the idea:
Ok, ladies- proudly display your Rockin' Girl Blogger Image on your blog and nominate 5 gals who you think are great bloggers! Be sure to let them know they have been nominated via email or a comment on their blog.

Sorry if I have doubled anyone up.

It's been a week now and we have no ideas on boys names. We'd like something that is a little bit unusual like Kyan's names, but not something totally obscure and wierd that he has to explain for his whole life. Post a reply with some of your favouorite names to give us a bit of inspiration.

I posted a new page plan to 2 croppin cousins today: 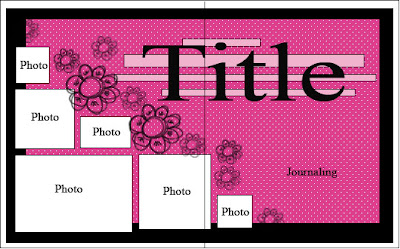 Check it out at 2 croppin cousins If you use the plan and submit it, you can be in the running for a prize.

If you have joined my sketch site, you should have recieved an update in the last couple of days with a free blinkie. Can't wait to see these popping up across the net.

Well, I'm pretty sure everyone already knows that we are having a baby, so clearly that is not the news. We did however have an ultrasound today to do the general growth stuff and to try to find out the gender. 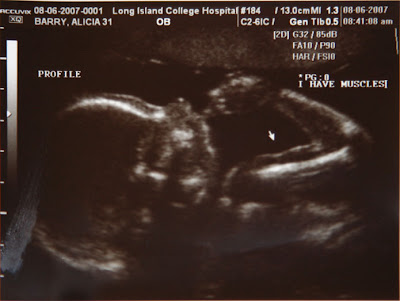 Both of us really wanted a girl, since we already have a boy, and I really felt like it was a girl. Must have been wishful thinking, as the little baby showed us very clearly that he is in fact a boy. Michael is pretty disapoointed, but I know he will get used to the idea. I'm OK with it. I would like it to have been a girl, but any baby is a good baby.

We got stacks of print outs from the ultrasound. I think she took pity on the fact that Michael had to miss out as he had to stay home with Kyan. I'll scan them in soon and upload a few more. Everything else looks good and healthy so that's good.

Meanwhile, Kyan continues to be very cute. Rather than recount the story again, check out Michael's blog (link on the sidebar) for a very funny story.
Posted by Alicia Barry at 7:11 PM 12 comments:

August DT Kit for I am a Scrapaholic.

These are the projects that I made with the August kit from I am a Scrapaholic. I really liked this kit. The colours were really pretty to work with. The "Joy" layout was the DT sketch layout from Janelle. 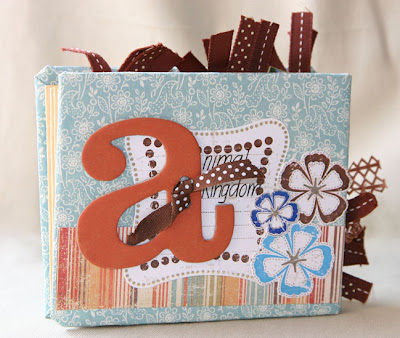 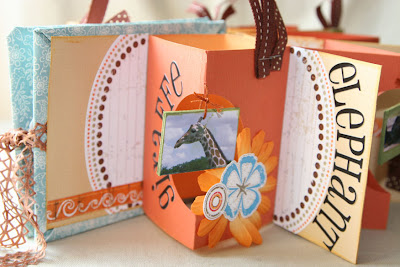 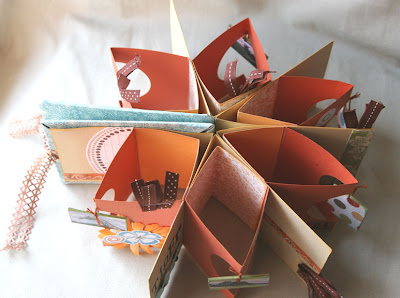 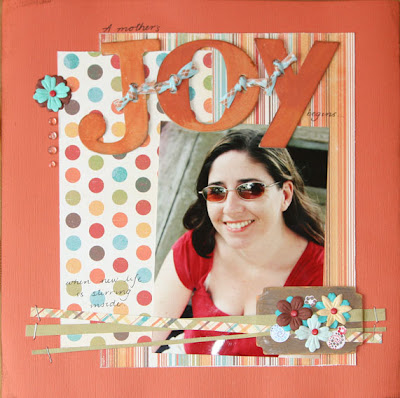 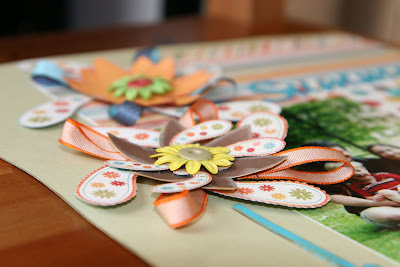 Here are my projects using the August kit from 2CC. This month sees the introduction on acrylic stamps to the site. They are exclusively made by wildflower stamps for 2CC, so this is the only place you can get them. 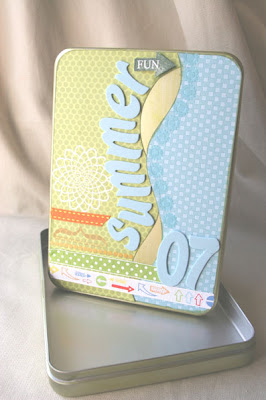 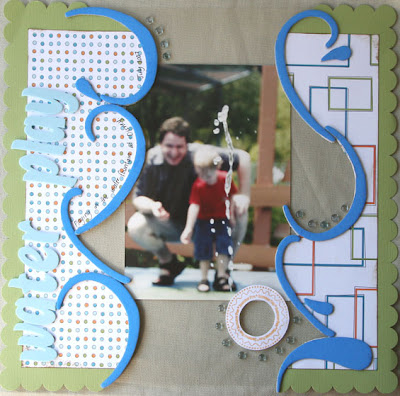 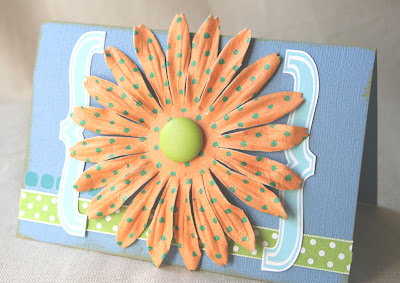 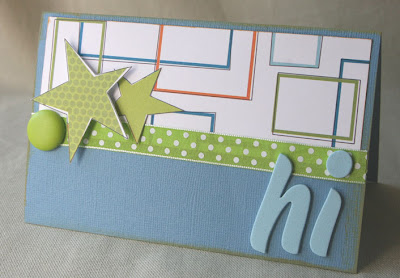 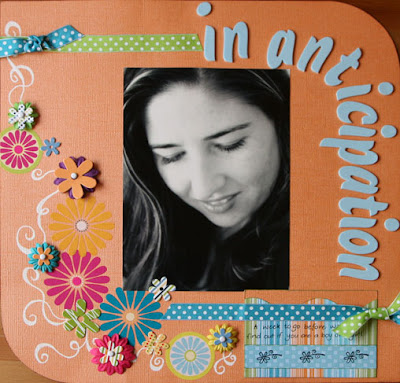 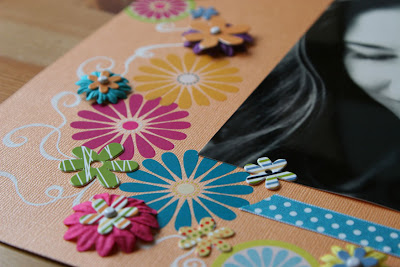