I have started a website with galleries of some of my stuff, to keep it all in pone place. It's still new and has a lot of stuff to be added to it, but have a look and leave me a note in the guest book.
http://www.freewebs.com/aliciabarrydesigns 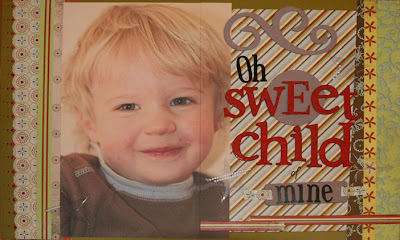 I am going to set up my sketch blog the same way. In the meantime, here is a layout I did for the 2CC DT challenges.

The weather yesterday was beautiful. We went out to the park, I didn't even wear my big coat. Today however, it is snowing. Doesn't make any sense. it didn;t bother me too much, as we could stay inside. Michael on the other hand has had a horror day. he decided to try to come back early in case the weather cancelled flights. Well cancel they did, in a big way. A plane actually went off the end of the runway at one of the NY airports. Michael decided that since he couldn't get home and was at the airport, he would go to Washington instead since the airport there was still open. He sat int he airport all day waiting for that flight and after about 8 hours of waiting they cancelled that one too. He was not happy. So, he got on a flight to Virginia. Not even sure where that is, but he is now driving three hours to Washington at the moment.

I have a feeling he will have a more detailed version of events on his blog.

Meanwhile, I get to live the life of a single mother for another week. Hopefully Kat will come and visit me and bring her son to have a play with Kyan.
Posted by Alicia Barry at 8:59 PM

How scary I would not have known what to do. Enjoy the time you have to yourself to scrap your heart out.

Hey Leish,
I popped over to your website but could not sign the guest book. Great site. good for you

I can so relate to the single mum thing! My DH has just finished a 6 week stint (luckily weekends at home!) between home and Sydney...with three kids by myself for the week it can be tiring!

But, at least I have my family and friends close! I admire your strength Alicia!

Hoping that Michael can make it home safely to you and Kyan very very shortly.

Love the layout, especially the title! I'm gonna have to steal that one! LOL!!!

the web site is awesome.