It's been a frustrating, yet productive day. We start the lease for the apartment as of tomorrow, so we figured that someone should have told us something about getting keys by now. Apparently, you don;t get told these things unless you chase it up yourself. Michael had to leave at least 3 messages before the broker rang back, then she got us mixed up with another client. She tried to tell me that the lease didn't start until November and that it is for a one bedroom place. I wasn't doing very well with that bad news, but she figured out who she was talking to and started to make some sense.

We got hold of the superintendant, and organised to meet to get the keys. Wwe arrived and waited and waited. Michael called him. We waited some more. he finally arrived only to discover that his key didn't work. We could only tell this from observation, as he was telling us nothing. we watching hom completely change the entire lock, before eventually getting keys.

When we came to look at the place, we were told that it would be painted before we moved in and that grids would be placed over the windows, as they are required by law for high apartments. Surprise, surprise, none of this was done. But that's not all. To my disgust, the place is absolutely putrid. The last tennants obviously haven't even made the effort of sweeping the floor, let alone cleaning when they left. there is food spatter all through the microwave, oven and fridge. The bathroom is disgusting. The windows are filthy. The kitchen sink hasn't even been cleaned. Needless to say Michael will be talking to the broker. They also need to fix the door that goes to the fire escape. Re-connect the smoke alarm, and fix some little holes in the walls. Obviously I know that standards are different in different countries, but it's not like this is a 3rd world country. i would have expected that you clean when you move out.

Anyway, enough rambling. I'm sure that once it is cleaned and furnished it will look good. Speaking of which, now that we have measured up the place, we have made our final decisions about furniture and I am back to Ikea tomorrow to give them all our money. I have to go on my own as Michael has to fly to Washington DC for his orientation, then he starts work, so I giess the house stuff is now officially my domain.

Almost all the big shows have started their new seaason over, except Lost, which starts next week. There are also some new shows. Grey's Anatomy is great. Desperate Housewives has started again with some strange goings ons.

I better head to bed, but here are a couple of the layouts I have been working on. Be nice, I don't have all of my supplies yet. The heroes one is a sample for the weekly challenge competion I un at Scrapbook City. There are prizes to be won, so if you don't already participate, please come over and join in. There will be a new round starting in a week. 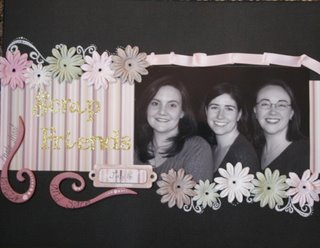 edited to add: I'm sorry, I have no idea why that photo is sideways.
Posted by Alicia Barry at 8:48 PM

Hello and YUK! I can't believe how dirty the apartment was left for you. I hope it is all fixed up and clean quickly. I guess you get to do all the cleaning, though, lucky you! I'm happy you have your keys and can now start making things work!
xx S.

I know you will have fun going back to Ikea and spending money!
I can't imagine being with out scrapping supplies all my for this long .....your doing well. I love the layouts!!!!

Hope you get your apartment woes sorted out and are soon settled.

That's not a good start with the apartment! Sounds like heaps of work before you get sorted!

You are going to have to give me little hints about LOST, I think. I'm addicted to this show! Just love it!

Terrible news about the apartment. At least you have a week before you move in for it to be fixed up.

Love the LOs. Would be happy to help you spend your money at Ikea.
LOL. Hugs for Kyan

Hi Alicia, I would be disgusted too re: the cleaning or lack of.